The following are examples of training work we have done. We
have provided training for volunteers of non-profit run historic sites
and for contractors as specified by preservation architects for other
projects:

Here’s an example of an all volunteer workshop lead by Andy deGruchy
over a two week period. The group saved the little historic bridge and
did it for no cost to the Weisel International Youth Hostel and the
Bucks County and Nockamixon Park Systems. deGruchy Masonry, Inc.
contacted the Heritage Conservation Organization in Boulder, CO who put
the word out and organized the workshop. Andy deGruchy has a philosophy
that a workshop for masonry restoration should not be done inside a
building where work is practiced only “In theory” and then the work is
torn down and material and labor wasted. Instead, Andy believes that
using the labor and material to accomplish a needed work for an ailing
structure serves many purposed simultaneously. One purpose is to
accomplish some needed intervention immediately rather than talking
about it and letting the historical object fall down while well-intended
plans are being made. Andy was the “fearless leader” and worked along
side everyone to coach and encourage all the participants until the
final completion. Oddly the work began on a September 11 morning, a
poignant date that counters the painful legacy it conjures up by instead
having a group of committed people choose to start saving, healing,
helping and rebuilding.

A small historic country bridge in Bucks County, PA was stabilized with NHL lime/sand/casein grout and then repointed after laying up all the fallen stonework using Pure Natural Hydraulic Lime mortar throughout.

In 2006 we coached a crew of masons in mixing up St. Astier Natural Hydraulic Lime #3.5 with black slag inclusions to reproduce a similar mixture tooled to an inverted-V style joint on the Burgess Foulke House Museum in Quakertown, PA. 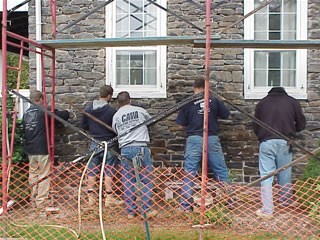 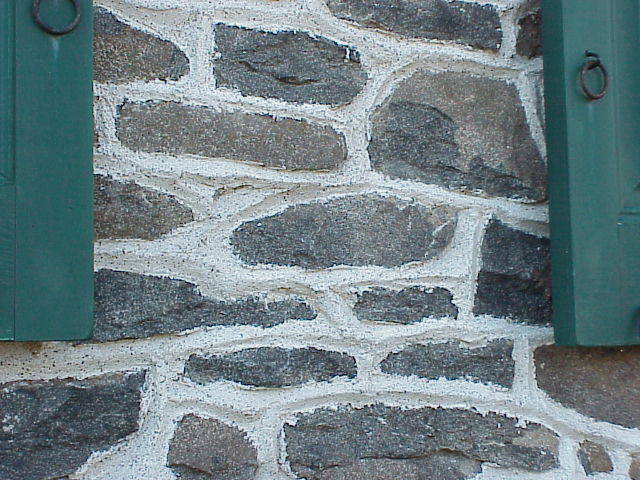 Previous Portland cement patches held water into the bedding mortar so that after the Portland cement was removed we took moisture meter readings to see that the levels of moisture in the wall dropped prior to repointing. This workshop was done at no additional cost to the Historic Society that owns the building after they awarded the bid to the lowest qualified bidder at a fixed, quoted cost.

We demonstrated to local crews the use of St.Astier Lithomex and Natural Hydraulic Limes for applications on the St. John the Divine Church in New York City. 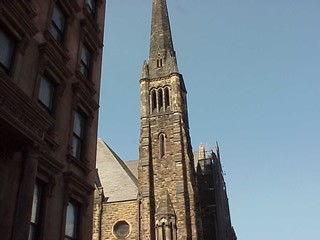 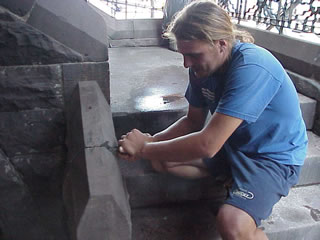 The National Park Service hired deGruchy Masonry, Inc. to train and inspect work done by a contractor to the new Visitor’s Pavillion at Grey Towers, the home of the founder of the National Forest Service. They used St. Astier Natural Hydraulic Lime for interior and exterior plaster and for building stone walls. 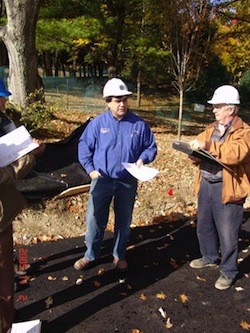 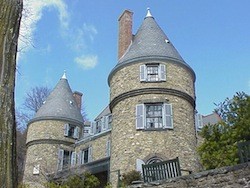