New Orleans. It’s quite the town especially during the weeks leading up to Mardi Gras, known as Carnival. Technically beginning on January 6th and concluding on the day before Ash Wednesday (aka Fat Tuesday), the long celebration is concentrated on the final few weeks, giving rise to more frequent parades and events.  Granted I had never been there before but what I expected was much different from my experience. As a Philadelphia native, I had assumed that it’s nothing but one insane party similar to events that might occur during the Mummers parade on New Year’s Day in Philly, and be only on Fat Tuesday. What I had experienced was by far richer in both culture and architectural significance. I don’t mean this to down play the heritage of historically significant Philadelphia. It’s just that New Orleans has a charm that I believe to be facilitated by it organic architectural style, originating in function over form. Spending most of my time in the oldest neighborhood in New Orleans also known as the French Quarter or as some may traditionally refer to it as Vieux Carré, I felt a certain type of warmth from the people and its buildings. The symbiotic relationship felt I found to be rooted in the architecture bound mostly by French, Spanish and African influence. This dynamic create a true Creole culture. Perhaps this is why nobody can exactly pinpoint the exact year that Carnival festivities began, a very real unique place and people whose origins can be traced to their roots but only studied in regard to its complex organic creation. The trend can be translated to local architecture in the French quarter however it is a bit easier to study. A New Orleans local showed me around the French Quarter explaining all the influences of Spanish, French, African and local climate on many of the buildings architecture. Probably the most iconic would be the balconies and galleries extending over the sidewalks. Just to be clear balconies are cantilevered into the building with no supporting posts extending halfway over the sidewalk, while galleries typically extend to the edge of the street. Unbeknownst to me I found that the reason for this is threefold. First, has to deal with the influence of the Spanish and French architects designing buildings since New Orleans beginnings. However, more often than not these buildings needed to be protected from the weather. Wind driven rain during hot summers created the need to have large open windows to permit air flow but something needs to prevent the buildings from getting wet on the inside, hence the need for balconies to act as an eve to prevent rain from entering the interior. The same principle also protects the inferior masonry walls. New Orleans suffers from poor clay local clay for making bricks. The result being bricks called “soft reds &amp; hard tans” that in most cases must be protected with a stucco or render of lime.

What is currently known as the Napoleon house was first occupied by the mayor of New Orleans from 1812 to 1815. Although Napoleon never came he was offered this residence during his exile in 1822. 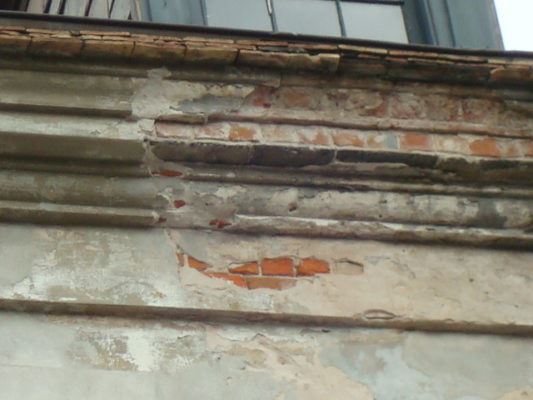 Detailing of deteriorated “Soft red” brick rendered with lime stucco as a Trompe L’oei to imitate limestone blocks on the Napoleon House. Another defining characteristic of architecture in the French Quarter is the entresol, also known as mezzanine. Entresol’s were needed for storage in commercial buildings due to the high local water table.  Looking at the exterior of a building one can clearly notice the well defined tall window front that help hide the storage floor between the 1st and 2nd floors. 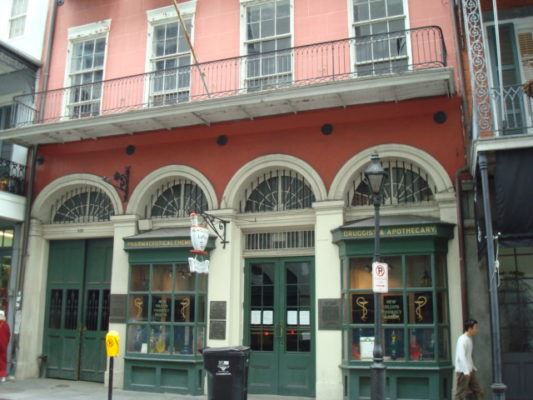 This store front exemplifies the use of an entresol commonly found in the French Quarter. Due to New Orleans high water table, rising damp is a big issue for many of the building. Because the majority of the historic Buildings located in the Vieux Carré district were built before the advent of Portland cement, lime was used and accommodated moisture very well.  However, today pure lime technology is used to restore the local historic properties, which results in fewer lost or damaged cultural resources. The time I spent in New Orleans was certainly too limited. There was far too much to see in the few days I was there. Its impact left me forever moved by its places and people. For anyone who has not been there. GO! The treasure hidden in the city is everywhere, waiting for people to experience it and take a piece of it home. Perhaps the next time I visit I will see you there.   LimeWorks.us
Tags:
Archive
Newer Case Study on Masonry Repair and Patching Material – Lithomex
Back to list
Older The Bill of Rights for Masonry Structures

This is part of a series of blog entries that will feature mason, Randy Ruth. Randy was the former lab technician at LimeWorks.us an...

END_OF_DOCUMENT_TOKEN_TO_BE_REPLACED

Our Ecologic™ Mortar uses a sharp well graded proprietary blend, so it’s not just ANY sand! The dictionary definition of Sand: weat...

END_OF_DOCUMENT_TOKEN_TO_BE_REPLACED

by Debra Grube and Samantha Horvath LimeWorks.us is providing a custom blend of our Ecologic™ Mortar for the restoration of Mt. V...

END_OF_DOCUMENT_TOKEN_TO_BE_REPLACED

Recently some of the employees of LimeWorks.us had the opportunity to learn more about our product Lithomex from D...

END_OF_DOCUMENT_TOKEN_TO_BE_REPLACED

Lime putty for mortar has been in known use for over 6000 years. Modern Portland cement, lime and sand mortars have dominated for le...

END_OF_DOCUMENT_TOKEN_TO_BE_REPLACED

Prior to the 1940’s many brick and stone buildings were constructed with lime and sand for mortar. Many times these limes were inadv...

END_OF_DOCUMENT_TOKEN_TO_BE_REPLACED

An Undertaking of Passion and Love LimeWorks.us is a big part of helping to restore a prominent landmark in New York City, St. Patri...

END_OF_DOCUMENT_TOKEN_TO_BE_REPLACED

Straw bale construction is the best of both worlds, it is a green and sustainable way of building and can be affordable with low mai...

END_OF_DOCUMENT_TOKEN_TO_BE_REPLACED

The University of Virginia is the only US university with a World Heritage designation, it’s conservation is of the utmost importanc...

END_OF_DOCUMENT_TOKEN_TO_BE_REPLACED

The Chemical Heritage Foundation released an episode of their award winning podcast Distillations.  In this episode, Randy Ruth, for...